So today we rested, meaning we didn’t walk for miles, instead we walked for chores and the sights. We are in Borgos, the headquarters of Franco during the Spanish Cvil War.

We did our chores: Washing and shoe shopping as well as seeing sights, particularly the Museum of Human Evolution, followed by the cathedral of Santa Maria (13th century), now a UNESCO world heritage site.

The museum was very interesting. The study of our cousins and ancestors has come a long way since my history lessons in high school. There have been many new discoveries of species of hominids and the DNA record of modern man shows we share homo sapians and Neanderthal genes.  Here are few of our cousins. You may remember Lucy… 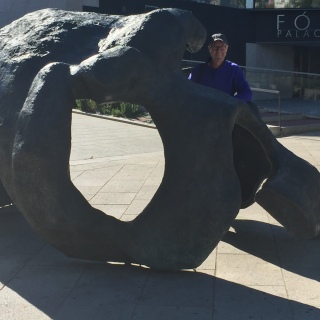 As for the cathedral, to say it was gaudy and elaborate are understatements. It was an exercise in political and religious power, with chapels added to the original building supposedly to honor a saint like Saint Catherine but were ultimately used as the crypt for the bishop or cardinal of the day. It felt like every chapel or nave which was added over the decades and generations was an attempt to out do the previous cardinal in grandeur.  An exercise in oneupmanship. Lots of dead white guys to navigate around. Nonetheless it was magnificent, particularly the alters, domes and stainglass.

Without any authority on which to base my opinion, I have decided the carved, elaborate, wooden alter pieces serve two functions: 1. To cower the simple Christian into compliance by the enormous display of wealth and power; and 2. To teach the stories of the Bible and of the Saints to the illiterate congregations. Very effective.

The dome which delighted me was a rococo baroque number in the Orro Baqui style – the fear of emptiness genre. Leave no space unadorned. It felt like a wild party going on above me. Fabulous. 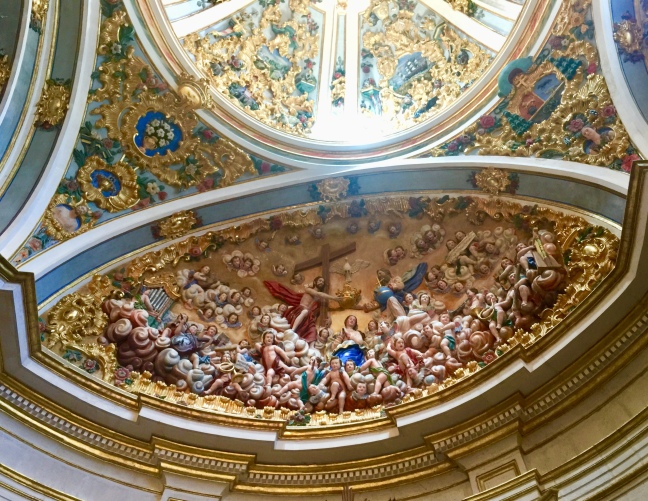 We completed the day with dinner with some of our buddies who converged in Borgos. It was like a reunion.