Today was an easy day compared to yesterday. We left early and prepared for a six hour push to Santa Domingo de la Calzada.

We have left the vineyards behind, the farmland now growing celeriac and wheat. We found ourselves in the midst of a herd of sheep crossing the path with the sheep dogs organizing the crossing. The shepherd led the way and the dogs rounded up the stragglers. 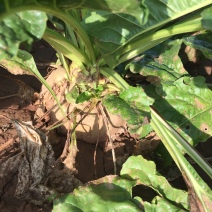 The most disturbing event of the day was passing through the hamlet of Ciruena. Some bright spark built a whole new town with apartments, townhouses, parks, golf course and swimming pool which was spookily, empty. Lots of For Sale signs. The original hamlet was run down and vacant and now it’s new suburb was just as empty. Not sure if this was an outcome of the GFC or the outcome of opportunism when Spain joined the EU. Either way it was disturbing particularly in light of the migration to Europe of refugees from the Middle East. Hundreds of vacant apartments yet refugees struggle to survive. 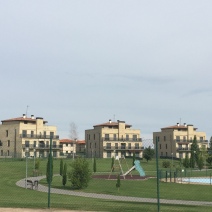 In fact the sad theme running through our meander from medieval hamlet to medieval hamlet is the slow death of these once vibrant, community spaces. The young leave, the elderly stay and continue to farm and tend the gardens and animals until they die. The children don’t come home so the town slowly dies. We had breakfast this morning at Azofra and only the pilgrims keep the town going.

So we get to our destination,Santa Domingo de la Calzada, to learn that Saint Domingo is patron saint for Engineers as he helped the pilgrims on their way by improving the bridges, roads, infrastructure and lodgings of pilgrims. He is also acclaimed for the resurrection of a young pilgrim who was hanged. He was still alive on the gallows weeks later and when this was discovered, the town judge was told about this. He, of course, scoffed at the suggestion, and said the boy was as dead as the chicken that he was eating. The chicken promptly returned to life thus confirming Domingo’s intercession. So the cathedral has interned Domingo and also houses a chicken coup in the church with live chickens. Yep. chickens in the cathedral.

We spent the night at a convent built in the Middle Ages. And just to finish off this post, here are two intriguing pieces of medieval art to get you thinking. 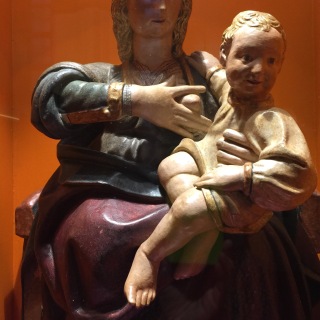