The journey to our next town, Belorado saw us cross into our third region of Spain – Castillo y León – the largest of Spain’s regions. This region has been fraught by conflict as it ‘unites’ historic rivalry communities/kingdoms. We walked through sunflower fields which ‘enjoyed’ attention from pilgrims as the heads ripened. 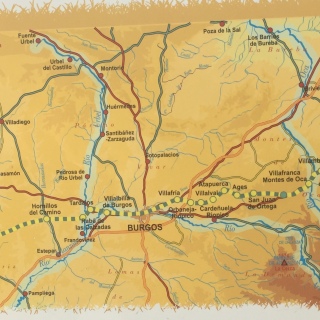 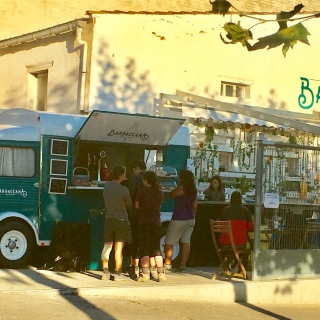 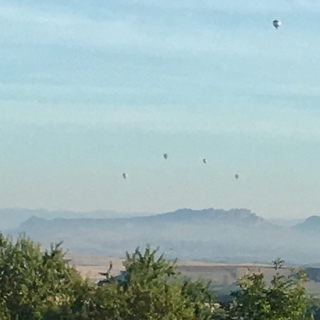 I found my name on a flower! We saw hot air balloons in the distance as the dawn broke; a lone, timeless cross juxtaposed against the modern power line; a road side pilgrim’s rest point; and huge, high big skies. We walked in 30 degrees during the afternoon. The earlier we leave the easier the afternoons in the heat are.

We got to Belorado and chose to stay in another church albergue. The pilgrims staying in the monasteries are gentler and we have met some great people such as Bjorn from Iceland, Ruby from Melbourne, Mara from South Korea and others.

Two notable experiences while in Belorado were

1. Working out what kind of bird nests in belfries.

The answer: the White Stork known famously for the stork that delivers the babies.

2.The other experience was attending the Saturday night Mass and Pilgrim’s Blessing. Only the second time in my life have I attended a Mass. From the rhythm of the prayers, I could pick the Lord’s Prayer, the Creed and the Benediction. I also noted that reference to God/Lord is La Senor ( the Mister). I was given an English translation of the Pilgrim’s blessing and then found myself being asked to read it. I read the prayer and the motivation for taking the pilgrimage in church! In front of everyone. I gave it my best shot. It was read in German, French and Italian! We then were blessed with flying holy water! From a silver wand. I got more than a drop of it, more like a dollop. I was blessed!

we had a great time in Belorado.